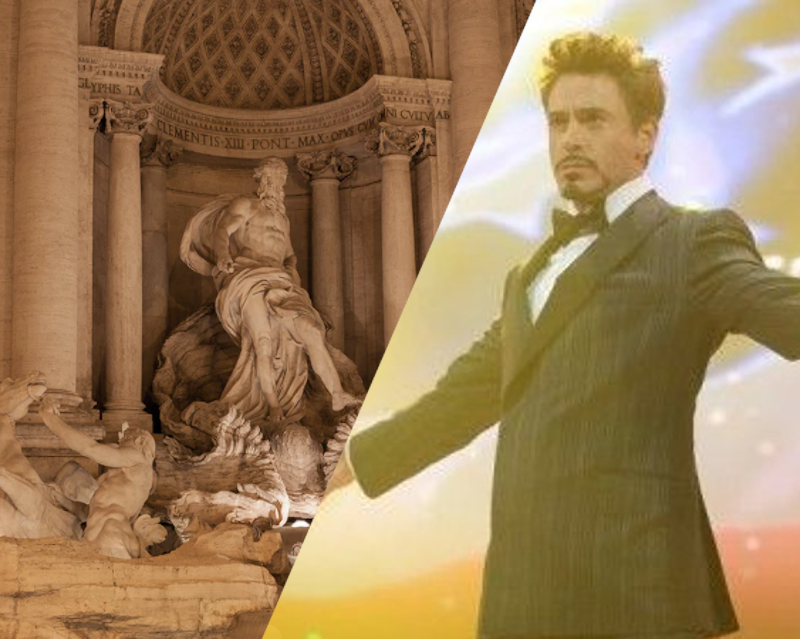 In the beginning, God made man in His image, to be His kings and queens in creation. But man was young and inexperienced. For reasons known only to God, he was dependent on this strange process of learning by observation, reasoning, and abstraction. In order to train man for his royal office and protect him, he was placed under the tutelage of higher beings, angelic powers who do not need to learn but perceive reality simply and intuitively. This way he could grow and learn and eventually join his father's reign.

Unfortunately, not all of these tutors were on board with this role. Why indeed should a puny creature of bones and blood be the heir of the Most High? Thus Satan tricked the first humans into rebellion, and in doing so made them and their descendants more into slaves than wards for himself and his cronies.

This move created the ancient world of paganism. Ancient man, cast out of the presence of God into a big, scary world, was in no shape to take care of himself. The rebellious heavenly powers seemed to offer an accessible way to get a grip on the world. The Creator dwelt in light inaccessible. His sanctuary was shut. But the gods could be reached, if in rather dark and unpleasant ways, and they had agreeable terms. Serve them, they claimed, and fertility, food, land, wealth, and more could all be secured. It might take some blood, weird rituals, and more than a little flattery, but that's better than returning to dust, right? So the bargain was struck. The nations of men—made to be heirs of the Creator Himself—satisfied themselves with slavery to His childcare staff.

Eventually, God dealt with this problem through the history of Israel, which He placed under the Angel of the Lord. The process was long, and you can read about it in the Bible. After millennia, the situation was resolved in Christ, the first mature Man. Made perfect through suffering, He took up the throne at the right hand of God and received the inheritance man was made for. This was a turning point. With a mature Man on the throne, the time of the vainglorious tutors had come to an end. They were not ready to give up their power over the nations, but He wrested it from them with a Spirit-formed army of martyrs.

This changed the world, or, rather, exorcised it. Not everywhere was liberated immediately, but as Jesus conquered, the Son of God cast out the usurpers and pretenders. The reign of the gods, at least for the world of their most glorious and successful empire, was over. The reign of God through man, now grown up, had come into its own.

Fast-forward about a thousand years, and a new problem arose. The first rebellious exchange of man was that of the Creator for the gods. But by this point man had spent quite some time exercising his dominion without the angelic intermediaries. And God, seeing His children had matured quite a bit from the old days, had been giving them much more space. This had an unfortunate side effect. Man began to get it in his head that he was entirely self-sufficient. He had outgrown his tutors; who's to say he had not also outgrown his Father?

And so modern man made a new mistake. Rather than exchanging the glory of God for the glory of lesser powers, but powers still above man, he got it into his head that he could make his own glory and get by on his own power. With science, reason, technology, capital, and the growing powers of the state, what could stop him from remaking the world? Ancient man sought shelter from a wild world in the gods. Modern man decided it was time to tame and remake the world. And the wild part: he could.

The process of man becoming his own master has been a rough one. He tried for a while to maximize his independence without entirely repudiating the God-Man above him, but eventually his hubris grew too great. Now with the right Science™, the right state controls, and the right social engineering, he imagines that he can reconstruct the entire world in his own image, and even remake himself in whatever image he pleases. Precisely what that image will be or how he will decide it seems still in flux.

The point of this whole story, however, is to identify the fundamental change between the founding sins of human society pre- and post-Christendom. The former was about idolatry, in the specific and literal sense. Man gave his allegiance to superior but created beings in the olden days. Now his ultimate allegiance is to himself. The philosophies involved are different. The “worldview” is different. The basic paradigm of rebellion is not what is once was. Idolatry still exists, but the old, literal form is indeed rarer than ever. And it really is a different thing. It matters that man once worshipped the gods and now worships himself, even if both are a failure to worship the true Father Almighty, Maker of heaven and earth. If we do not see this difference, I can't help but suspect we are bound to mistake our current situation. And if we mistake our current situation, we won't be able to chart the right course for the future.

Of course, even if we don't, Jesus is still in charge and will humble His presumptuous younger brothers soon enough.